Fatima Al Qadiri is endlessly fascinating. Having studied linguistics at university, she is a composer/producer, multimedia artist (this short film is highly recommended) and author. Born in Dakar, Senegal, she grew up in Kuwait during the Gulf War and its aftermath, and is now based in Brooklyn, New York. Musically, she draws on a palette that dances from hip hop to juke and trance to dubstep, by turn celebrating and subverting both Arabic and Western culture, and refusing to be bound to location.

Recording as Ayshay, she released the haunting ‘Warn-U’ EP on Tri Angle in September last year. The ‘Genre-Specific Xperience’ EP followed on UNO in November 2011: five tracks of towering, tautly wrought brilliance that I caught onto way too late. Happily, UNO have this week released the ‘GSX Remixes’ EP featuring reworks of select tracks from ‘Genre-Specific Xperience’ by an enviable crew of producers at the top of their game: Girl Unit, Kingdom, Ikonika, Nguzunguzu, DJ Rashad, Dubbel Dutch and Dutch E Germ.

The contributors share their thoughts on their remixes below – along with an exclusive premiere from Nguzunguzu – following a few words from Al Qadiri on how it all came together. Remixed artwork throughout by Kari Altmann.

How did the remix EP come about?

Fatima Al Qadiri: The remix record came about about a short period after the release of ‘Genre-Specific Xperience’. I really liked the idea of the remix album – a polarizing, commercial format that became popular in the 90s. For labels, it meant selling a record twice. Musically, the remixers had the ability to enhance or destroy the original material. Today, remixing is no longer just a musical exercise, it’s an advertising ploy for any product. In equal measure, it’s a cash cow for producers, many of whom operate under the notion that the less time spent on a remix, the better. For me, it was a way to explore the concept of genre as a commodity further, but also a chance to collaborate with producers I respect. A fine balance between marketing hell and collaboration heaven.

Were you surprised by where any of the producers took your songs?

Fatima Al Qadiri: I was definitely surprised by some of the remixes, but that comes with the territory. At the end of the day, you have no idea what any producer’s gonna do. That’s the exciting part of the process.

Girl Unit: I wanted to rework the original track which exists in such a digital environment with this raw drum pattern using super saturated sounds. Dragging the bright swirling synth line from the original down into a stormy, tense affair which switches up to this serene moment in which the signature vocals slip in, and then switch back with this constant hard/soft dynamic.

DJ Rashad is currently on tour. 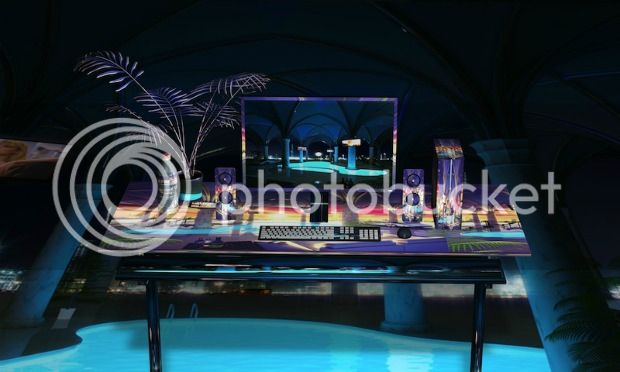 Kingdom:: The clap programming on Fatima’s original track is really what drew me to remixing it. There’s probably five or six different clap sounds all taking turns leading the rhythm at various points in the song. As I experimented with the stems it evolved into a three chapter remix, there’s an industrial funk build up that brings you to the door of the club, a really hyperactive bass drop area, then the floor to the club opens and you fall into the bump and grind blacklight room below.

Dubbel Dutch:: I had originally planed to do a really atmospheric remix with sparse percussion, but quickly changed my mind. That remnants of that idea however can be heard in the lengthy dramatic intro and the breakdown. I found it really challenging to incorporate the lead melodies from Vatican Vibes mainly because the licks that Fatima wrote were so strong that I didn’t want to fall into the trap of making a remix that sounded more like a bad edit of the original – so instead I tried to incorporate pieces of the melody into a new variation on the theme.

I focused a lot on creating a hybrid sound palette for this record. A lot of the elements used in the track ended up being mini references and micro-nods to styles and sounds that I’m inspired by. The flutes in the beginning are from an E-mu Proteus and have this classic grime sound. The snares in the main section are from the Drumline OST and contribute a lot to the militaristic feel of the track (I have this obsession with percussively driven Dutch bubbling records or any record that samples Drumline e.g. DJ Chuckie Caribbean Drums, or DJ Master-D Mad Drumz). For the breakdowns and outro of the remix I created some cut-time percussion inspired by zouk and tarracha rhythms. So overall this track sounds sort of like an imaginary collaboration between disparate artists who would probably never think to work together.

Nguzunguzu: We really love the original Hip Hop Spa and Fatima’s work in general. This song in particular takes you to this amazing spa palace. We wanted to our remix to take you to another room in the same spa complex. Our first thought was to add some big drums on there since the original is so minimal with percussion. We started with a heavy hip hop beat then played with the vocal samples a bit and moved the project into a more unique area.

Ikonika: The original of D-medley really spoke to me. It was warm and melancholic, something I’m musically attracted to. The weather here in London has been a little depressing these last few months. I recently built a studio in my garden and working in this detached space, with this weather, really played a big part in how the remix came out. My remix is the total opposite of the original, it’s emotionally cold and paranoid.

How I Made: Samuel Organ on his ‘A Safe Place In Cyberspace’ album

Skrillex and Four Tet team up on new track ‘Butterflies’